www.youtube.com© SEGA / Shenmue Project
New anime started from May/2022.
I thought I heard this title somewhere, but it was a game title that was developed around the year 2000.
I remember that it was an ambitious game with an open-world system while being a fighting action adventure, which was still rare at that time.
This title is an animated recreation of that SEKAIKAN(worldview), with a storyline that unfolds in beautiful graphics.
Since most of my memories of the original game have been lost, I can enjoy the animation almost as if I were watching it for the first time.
Production Telecom Animation Film Co.,Ltd.("LUPIN THE 3RD: THE CASTLE OF CAGLIOSTRO"), Director Sakurai Chikara("One Punch Man":Director), Composition Shimoyama Kento("BLEACH":Composition), Voice casts Matsukaze Masaya("Jormungand":Kasper Hekmatyar), Sakurai Takahiro("CODE GEASS Lelouch of the Rebellion":Kururugi Suzaku), Terui Haruka("Yuki Yuna is a Hero":Yuki Yuna), Fushimi Haruka, Kijima Ryuichi("BORUTO":Mitsuki), M・A・O("That Time I Got Reincarnated as a Slime":Shion) and others.

©2022「バブル」製作委員会
Animated film to be released from 13/May/2022.
It is an original work, set in a semi-submerged Tokyo where the gravity field has suddenly gone haywire due to "bubbles," the film depicts the romance between the main character and a mysterious girl, and the young people's battle for food and supplies.
The SEKAIKAN (worldview) is "The Little Mermaid" x  "Water World" x  "Parkour (a sport of jumping, running, and climbing on pipe-like structures)". The story is very much simple, yet the parkour action is fast and powerful enough to enjoy.
The script was written by Urobucho Gen "Puella Magi Madoka Magica" and produced by Kawamura Genki of "Your Name."
I wondered whether the story would end sad (like "Puella Magi Madoka Magica") or happy (like "Your Name."), and fianlly found out this film has a happy ending and the characters are all good people, making it a very refreshing film to watch.
The film was produced by WIT STUDIO ("Attack on Titan"), directed by Araki Tetsuro ("Attack on Titan : Director), music by Sawano Hiroyuki("Attack on Titan: Music), and voiced by Shison Jun, Riria, Hirose Alice, who are real actors and singer, and other characters are led by voice actor/actress Miyano Mamoru("STEINS;GATE": Okabe Rintaro), Kaji Yuki("Attack on Titan":Eren Yeager), Senbongi Sayaka("Kabaneri of the Iron Fortress":Mumei), Hatano Wataru("Kuroko no Basket":Mibuchi Reo), Osaka Ryota("Ace of Diamond" : Sawamura Eijun), Hatanaka Tasuku("My Hero Academia": Kaminari Denki), Inoue Marina("Tengen Toppa Gurren Lagann":Yoko Littner), Miki Shinichiro ("Fullmetal Alchemist": Roy Mustang) and others. 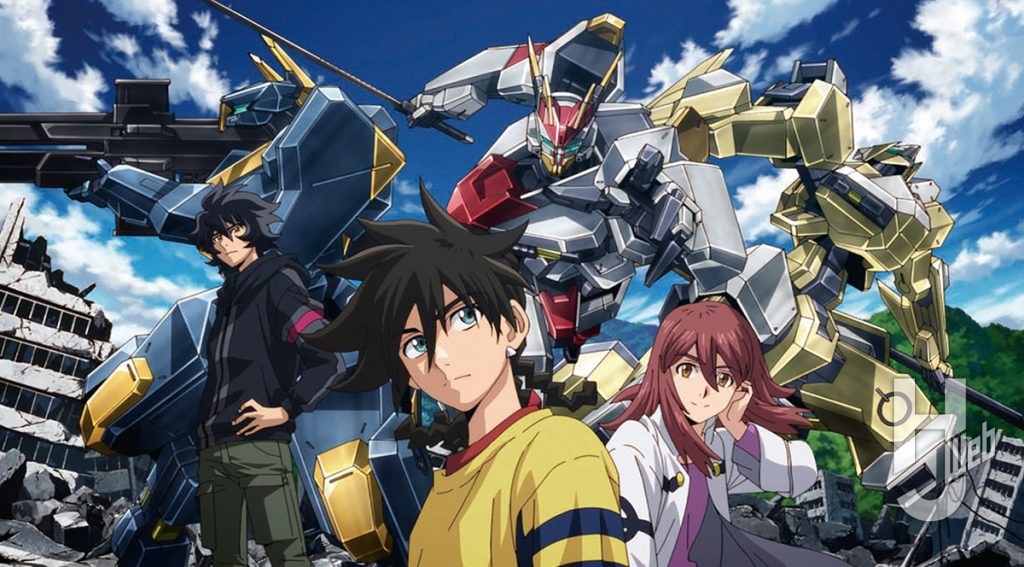 New anime started from Apr/2022.
This is the 2nd season of an original anime by the Namco Bandai Group, following on from the Oct-Dec/2021 season (13 episodes).
Although it is a robot story, it is a near-future science fiction set in Japan, which is in danger of being divided and occupied by foreign countries, and the intensifying conflict is more strongly portrayed in this 2nd season.
In the 2nd season, the viewer becomes accustomed to the unique robot forms and is able to immerse himself or herself in the deep story.
The production staffs and voice casts remain unchanged.

==detail from season 1=====
It is an original anime jointly produced by Bandai Namco Group (Bandai Spirits) and Sunrise (Sunrise Beyond), and elaborate plastic models will be developed alongside the anime.
The distinctive fuselage looks like a Gundam, but the lower body is like a horse or deer, reminiscent of the quadrupedal robots of Boston Dynamics of the U.S., and a glimpse into the planning stage of the modeling process is evident. The fact that Ken Okumura Design was involved in the mechanical design is also a sign of this. The work also has its own unique setting and worldview not found in other works, such as fighting alongside AI and Japan in the near future being ruled by world powers.
Original story/planning by SUNRISE BEYOND, directed by Habara Nobuyoshi("Fafner in the Azure":Director), composed by Kimura Noboru("Nyaruko: Crawling with Love" : Screenplay & Composition), and written by Kosuke Kurokawa (Crawling! Nyaruko-san: Composition/Screenplay), mechanical supervisor Okuyama Kiyoyuki(representative of Ken Okumura Design: designs GM, Porsche, Maserati, Ferrari, etc.), voice cacts Sato Gen("Dr.STONE":Chrome), Fujiwara Natsumi("GREAT PRETENDER":Abigail Jones), Uemura Yuto("Bungou Stray Dogs ":Nakajima Atsushi), Ishikawa Yui("Attack on Titan":Mikasa Ackermann), Ichinose Kana("Darling in the Franxx":Ichigo), Murata Taishi("BABY STEP":Maruo Eiichiro) and others. 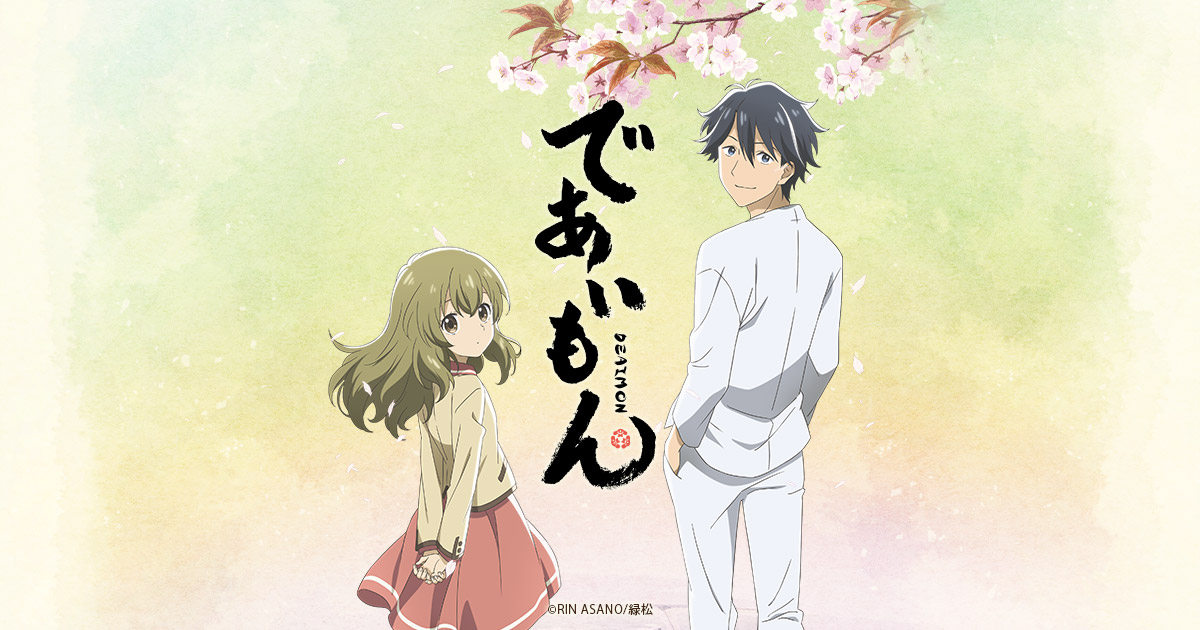 New anime started from Apr/2022.
Set in a long-established Japanese sweets shop in Kyoto, the story centers on the encounters and bonds between people, centering on a third-generation son who returns after a period of debauchery and a girl neglected by her own father.
The son is played by Shimazaki Nobunaga("BAKI":Hanma Baki) and the girl is played by Yuki Kozue who is nominated as a main character almost for the first time.
The progression of the story and the psychological portrayal of the people are very carefully composed by Yoshida Reiko("Violet Evergarden": composition). Director Oizaki Fumitoshi is the CEO of Encourage Films, which handles production.
Other voice casts are Koyama Rikiya("Detective Conan":Mouri Kogoro), Ohara Sayaka("Fairy Tail":Erza Scarlet), Suzuki Minori("Macross Δ":Freyja Wion), Takahashi Minami ("Food Wars!: Shokugeki no Soma":Tadokoro Megumi), Hayami  Saori("The Irregular at Magic High School":Shiba Miyuki), Matsuoka Yoshitsugu("Sword Art Online":Kirito) and others.
deaimon.jp